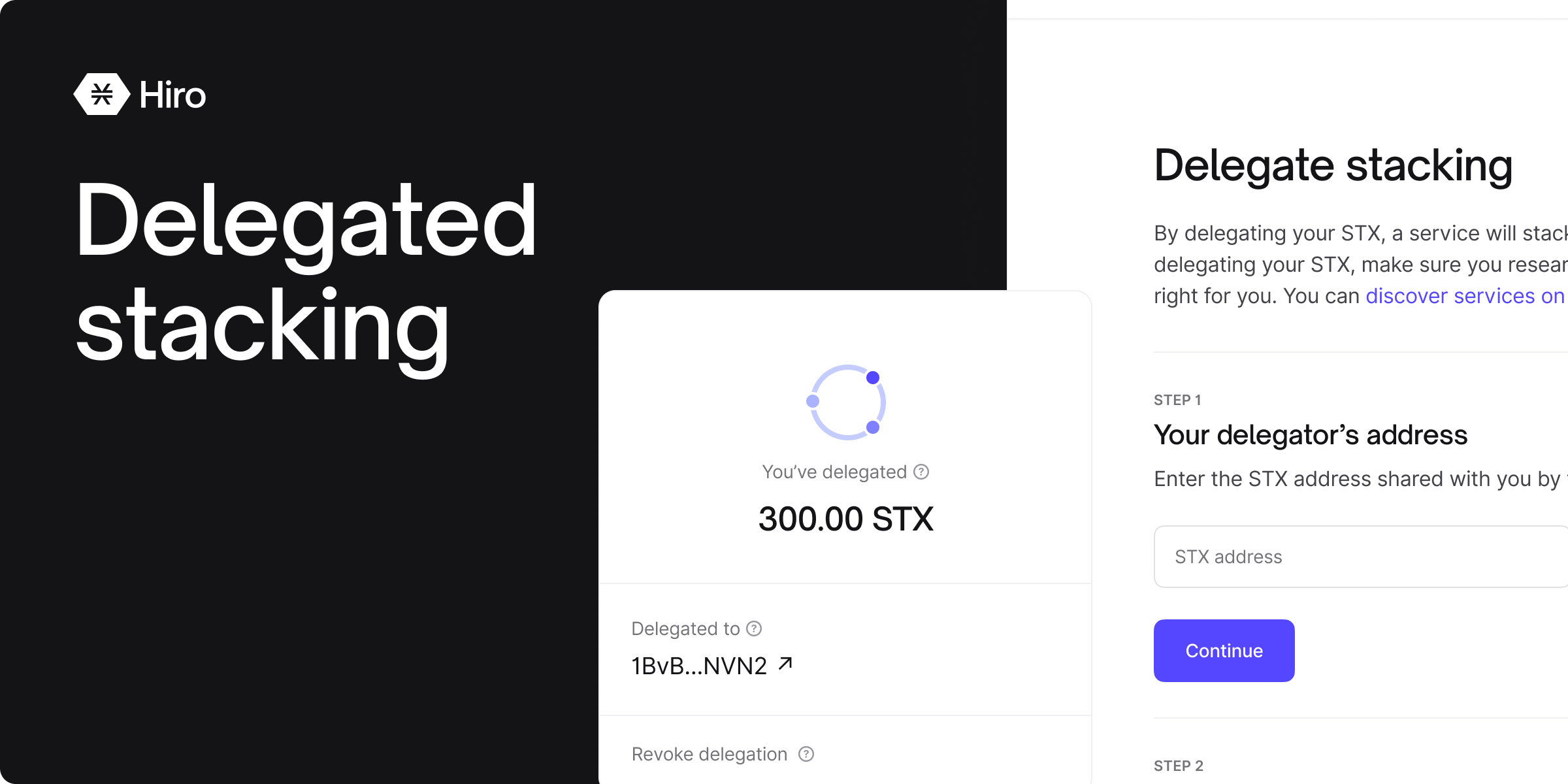 STX holders can now participate in Stacking by delegating their STX with the Stacks Wallet for MacOS, Windows, or Linux to third-party services that pool them with others, commit to Stacking and distribute BTC rewards to participants.

This new feature is especially useful for STX holders with fewer than the dynamically set minimum (currently 70,000 STX) since it empowers them to earn BTC from Stacking with any number of STX on hand. It also keeps STX safe at all times in the desktop Stacks Wallet, especially when used in conjunction with a Ledger device.

Your STX will never leave your wallet or end up in the possession of such third-party services when participating in Stacking delegation. Rather, you’ll simply broadcast a transaction that permits the delegation service to commit your STX to Stacking for up to 12 cycles (or about 6 months).

As with all forms of Stacking, STX are locked up after committed by the delegation service until the final cycle is complete. This means simply that the STX cannot be transferred anywhere or used for other purposes temporarily. However, STX holders can choose to revoke delegation at any time and this will prevent such delegation services from subsequently committing their STX to more cycles.

Each delegation service provides a STX address that users simply need to copy and paste into the Stacks Wallet in addition to indicating the maximum amount of STX they’d like to delegate.

Staked is one such delegation service who has released support for delegated Stacking this week ahead of cycle #3, which is expected to begin on Saturday, February 27th. Simply sign up for Staked and locate the STX address provided by them to initiate delegation in the Stacks Wallet.

While users with more than the dynamically set minimum can continue to commit their STX for Stacking directly with the Stacks Wallet, delegation provides them with the option to participate in Stacking without having to re-commit their STX manually after unlocking, track cycle timing, or otherwise have to navigate the intricacies of Stacking. As such, it provides a “set and forget” Stacking option for STX holders of all sizes.

Great work! I see in the video that you can revoke delegation, so it is possible to update the amount in case that you want to change the amount, I guess.

Do you have recommendations for delegation services as well like you have for users? Then users have better understanding what to look out for.

My thoughts re, Stacking services (make your own research):

Okcoin: Not your keys, not your coins.

My understanding is that StackedSats does not offer stacking due to legislation in Canada. Could you verify and update the link from the wallet to Start Stacking if necessary?

Staked I noticed, that the minimum amount is 10k STX and that you will receive your reward to a BTC address sent by email. I am not told for how long my stacks will be stacked, what btc address they use. Could you add these optional fields to the Stacks Wallet UI to teach users that they are in control of this? We want a user-owned internet!

Do you have recommendations for delegation services as well like you have for users?

Sure, what kinds of recommendations do you have in mind? Like guidelines for setting up a delegation service?

My understanding is that StackedSats does not offer stacking due to legislation in Canada.

I’ll check in with that team about the listing information we have there.

Could you add these optional fields to the Stacks Wallet UI to teach users that they are in control of this?

Per my comment elsewhere on the related GitHub issue, I’m not sure how to implement this exactly given how Clarity functions are currently designed. I’m open to suggestions however!